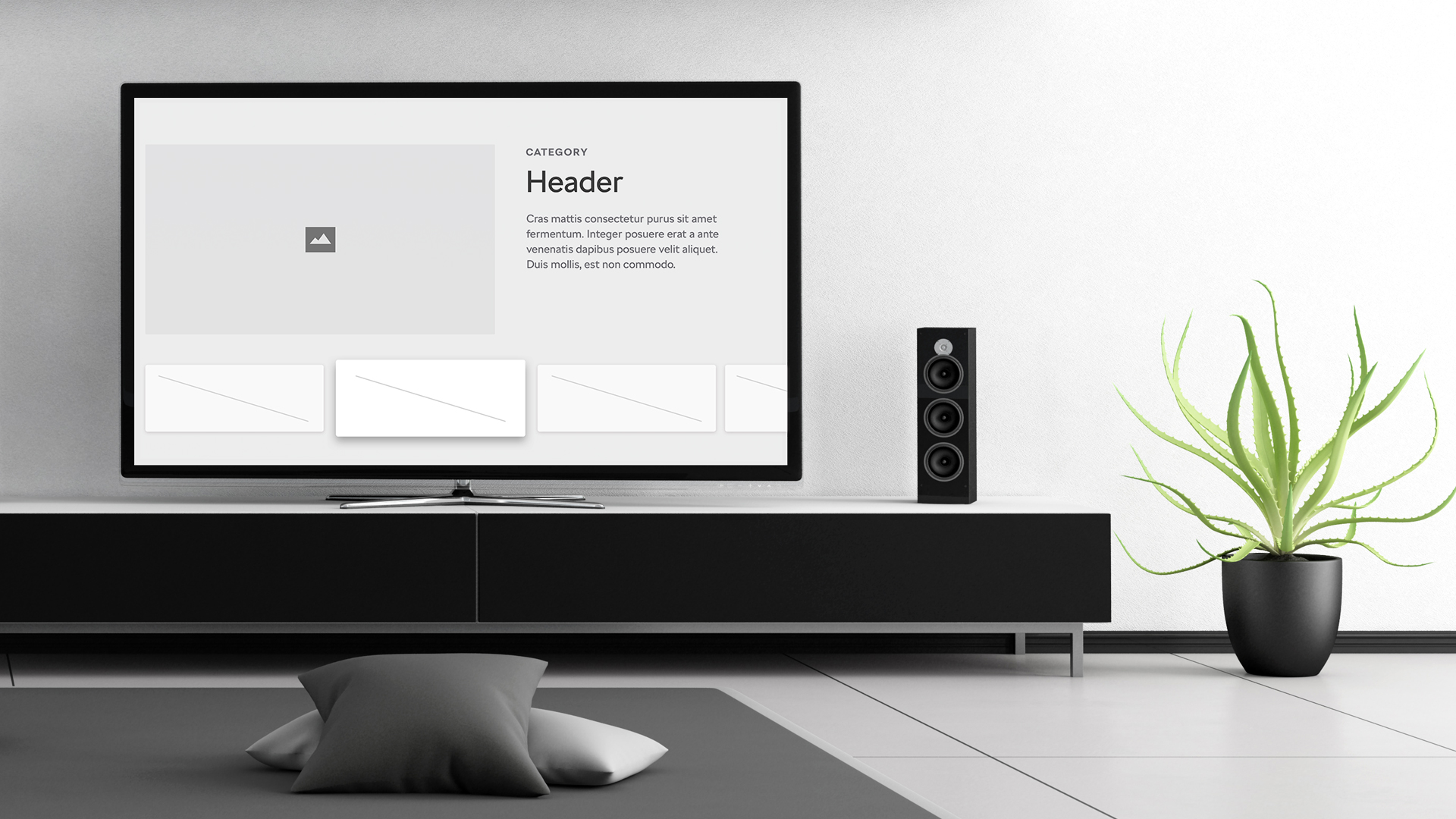 What puzzles are to be solved when designing the architecture of a TV app? What stack is good to use? In the last article of this series we’ll present approaches, tools, and frameworks for smart TV app development. We’ll also share 7 first hand tips that may come in handy.

We’ve already presented how to design the UI for smart TV.  The previous article tackled the navigation path and important features. Today, we’ll present the architecture of a smart TV app, builders, and possible issues you might encounter. We’ll also give you some useful tips that will make your developer’s life easier.

When you’ve got the controls figured out, it’s time to choose the technology you’ll use for the development.

What we knew beforehand:

Both, TizenTV and LG, are based on the current web technologies, so all the possible targets and devices where the app should run are covered. We only have to choose the appropriate javascript stack and we can start the development. The client chose TizenTV as the main platform for the development. We estimated that we’ll need around 10-15% more time for the additional port and webOS adjustments

In the end, this approach has proven to be not suitable. Because we discovered that:

Therefore we selected a more complex platform on faster devices for the initial development, instead of starting from scratch on a slower device with a less complete API. In other words, in order to upgrade the features for faster TVs during the second development cycle, we had to downgrade and optimize the features for slower TVs.

Let’s now talk about the stack; its core ended up something like this:

We chose React because most developers are familiar with it and we became used to it over the years. Personally, I still believe that the days of incredibly fast microapps based on jQuery are not over yet but here at eMan we regard React as the most suitable, clear, and well documented solution for single page apps at this moment.

We could spend countless hours talking about React’s performance optimization, but that’s not the purpose of this article. So we summed up the important bits:

We became fans of the React-MobX combination when developing websites. React has a magical @observer decorator that’ll ensure that whenever some props the component observes are changed, MobX carries out a new render cycle of the given component automatically. So long componentWillReceiveProps(), see you shouldComponentUpdate(), we had good times together but it’s time to move on.

When we were deciding on the stack, the Redux enthusiasts reasoned that the action and reducers are more clear and that one always knows what went wrong. And while that’s true, the volume of boilerplate code that’s necessary to create even for a small data operation became quite unbearable to us over the last two years. MobX also has actions and when these are annotated, the MobX developer tools will show them easily and then the debugging is as comfortable as when using Redux.

We agreed that using React+MobX is truly awesome. We wanted to be even more awesome so we had to take one extra step and introduce a sufficient general architecture; this introduces a mediator between data and Views that strictly separates the two layers. Ideally, that’ll mean one screen = one compact encapsulated whole. Because as much as we like React and its view on data, combining it with MobX creates a very tight link with observables which is bothering us.

These are the main issues we have:

Therefore, the ideal solutions are:

We wanted to divide the props that can be accepted by the React component into two groups as a bonus:

… while the interaction of these categories should be known only to the object/component that can offer them. The data source (mediator connected to the MobX store) knows the props dealing with clear data and the parent React component that renders our child component does not have access to the information about the data. Usually only the info about the UI is sent to it, e.g. what colour the subcomponent should be.

The issue with identities is largely solved by the Typescript itself, you only need to use the Interfaces instead of real classes. We identified the mediator between the View (React component) and Model (MobX store) as a usual Presenter and therefore the whole pattern is a typical MVP.

Presenter is a vanilla javascript class that doesn’t know the identity of its View, but it can handle two-way communication:

Put all together, ideally it should look something like this: 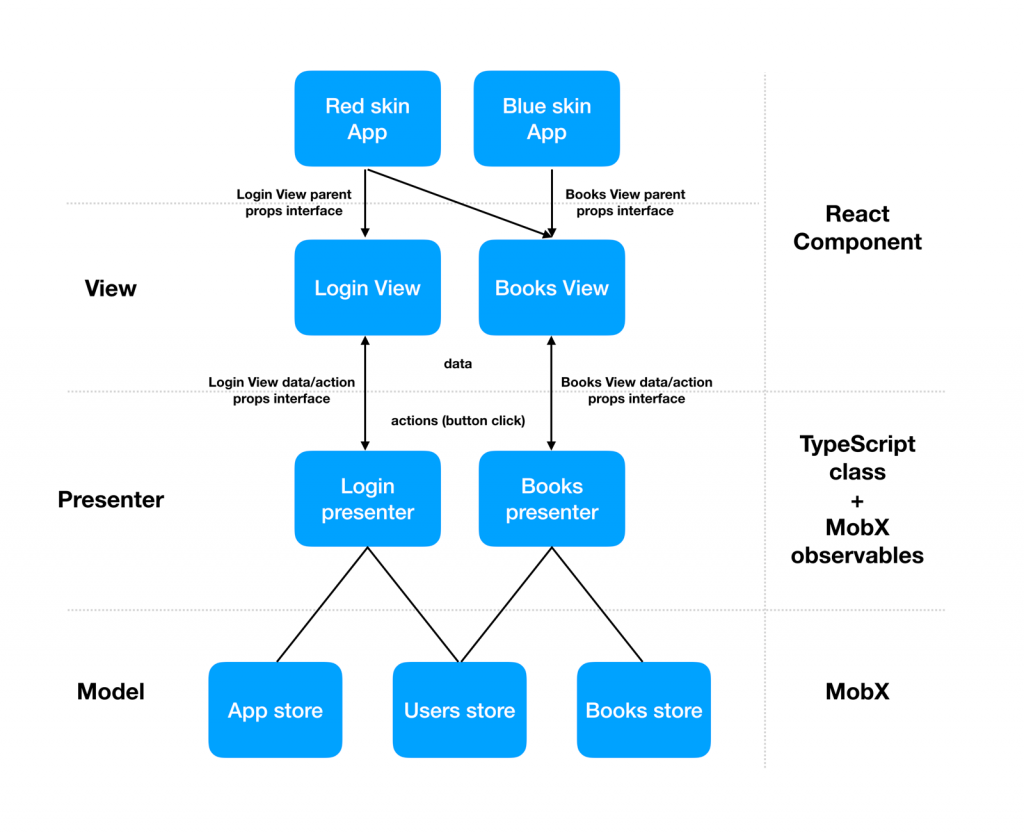 When we cleared up all these requests, the “only” thing remaining was to write the factors that’ll glue everything together and that’ll contain the most common logic possible for the entire MVP in one place:

… and a typical calling in a module that we export as a “clean” React component:

This mechanism allowed us to delegate specific tasks to specific classes and made the work with views and data clearer. Moreover, half of the team could deal with the implementation of Presenters and Models and only expose the Views interface, which was managed by the other half of the team.

7 tips for you after two months of development

And that’s our first TV adventure in a nutshell. We’ll leave the next steps in this messy, badly documented world up to you. 🙂 Should you need help while developing your apps for smart TVs or if you’d like to talk about this topic in more detail, stop by for a coffee at eMan, we’ll be glad to help.