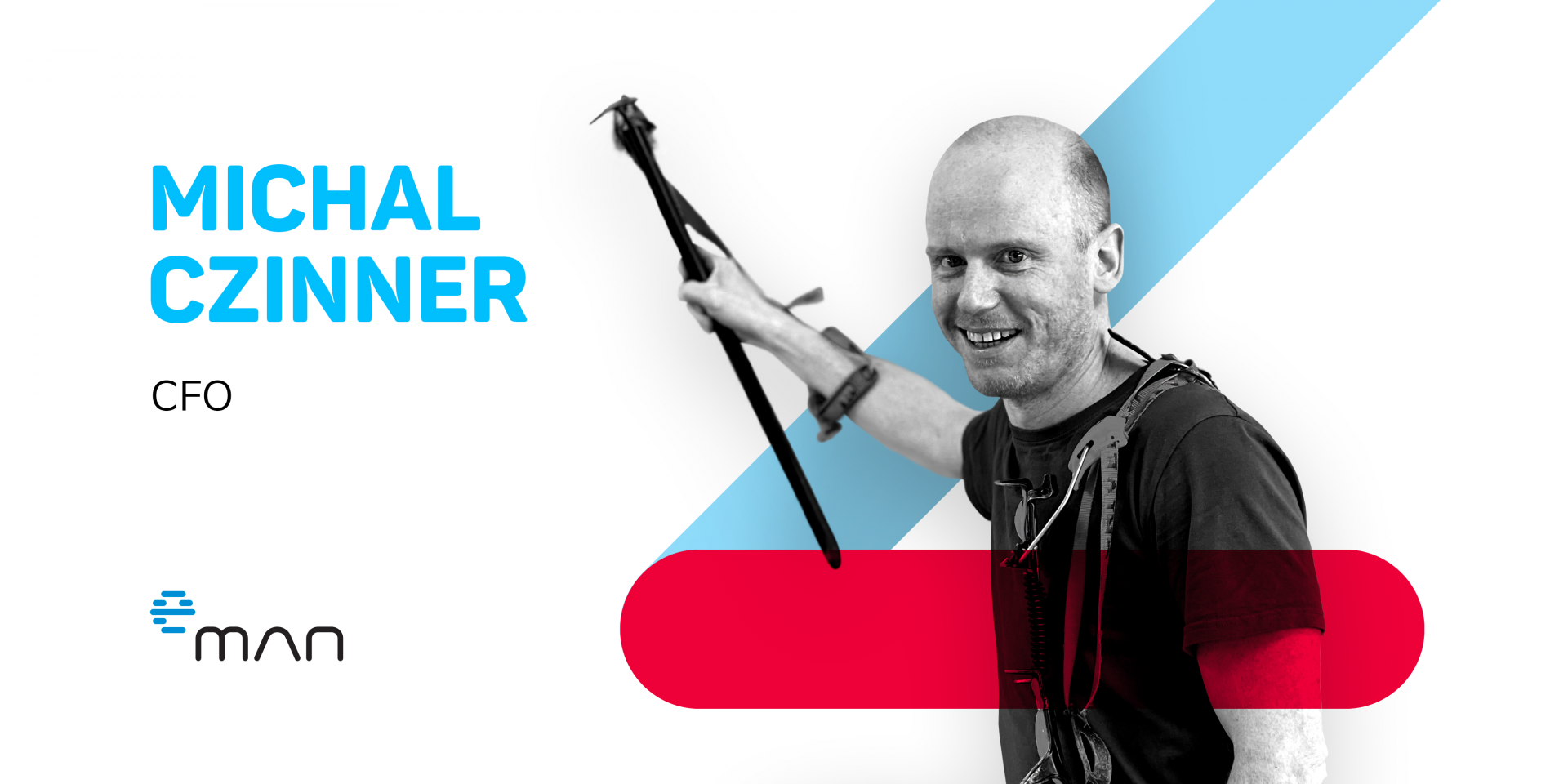 In today's episode of Humans, we introduce one of the seniors at eMan, who, in addition to the peaks of the technological world, has also conquered the peaks of the Alps. Michal Czinner, our CFO.

In the computer Paleolithic

My dad once brought home a 386 computer running MS-DOS. I started spending time with it, and this technology fascinated me more and more. I even started writing my personal diary in T602. Even though I went to the humanities grammar school, I kept playing with computers and knew that that was the direction I was going in.

After high school, I got into computer science and statistics at the University of Economics in Prague –⁠ a k tomu and also cartography, which I got a kick out of. They covered a lot about development methodologies, but there was also practical programming in JAVA and PHP. I remember the subject IT360 the most – database design and data modeling. It has influenced my entire career.

Around the end of junior year, I got down to serious work and I took a job as analyst at Unicorn. Everyone who joins there has to go through a programming nursery: 2-3 months of programming in JAVA. I really took a lot from that, because I got to understand its principles in more detail, and that has helped me a lot as an analyst…

THE BEGINNINGS OF EMAN

During my seven years at Unicorn, I met Tomáš Čermák, Jirka Horyna, Michal Košek, Vláďa Toman, and a story was born, which continues to this day. Around 2011, I felt like making a change. Back then, as the light of the future, smartphones were taking off, and I knew that those guys had set up a company dedicated to mobile applications, so I contacted them and joined eMan in 2012.

At that time, there were about 10 of us sitting in the office on Korunní. My first project was TaxiAgent (no, not for video) with Vláďa Toman and some other developers. It was a relatively large project, a similar idea to today’s Uber. The customer showed us a set of bulletin boards connected by strings, and on each board were ideas, and he said “I want to make this.” That’s how we did it. Unfortunately, despite its hopes, the project died very soon after testing and initial production.

I was primarily into analysis and UX at the time, but one had to be universal and do more or less everything. I don’t mean to say I’m lazy, but I’m tired of doing the same thing over and over again and fixing the same mistakes all the time. That’s why I created templates and procedures, invented automation and information sharing, and influenced how eMan made software.

We started to grow, and the need arose to specialize and turn down the punk a bit. We rented an open space, started working for some international clients, continued to grow, moved to the attic of a former farm in Strašnice. At that time, I was involved in the development and organization of teams and procedures.

I was CTO for about a year, then Jirka Pech came, and I started to take care of the development of EIS (eMan Information System) and internal systems. Then, about two years ago, the CFO left and I took over the financial management of eMan. What’s helped me a lot in this is logical thinking, long experience at eMan, the IT business, and a few things I learned at the University of Economics.

I try to compensate for the constant sitting at the PC with sports – I prefer the mountains. I go to the Alps in winter and summer, I’ve scaled Monte Rosa and Gran Paradiso, and I hope to check off Mont Blanc this year. In the Czech Republic, I wander the Giant (Krkonoše) the Jizera (Jizerské) Mountains whenever I can. And biking, cross-country skiing, snowboarding, windsurfing… I also like good, homemade food – from ordinary bread to beef goulash. And I like to cook too.

In conclusion? I love that, as a company, we are always moving and doing interesting projects. We’ve always gone for the biggest innovations, and we’ve been keeping it up. That’s probably, as someone who can’t stand routine work, the most important thing for me.