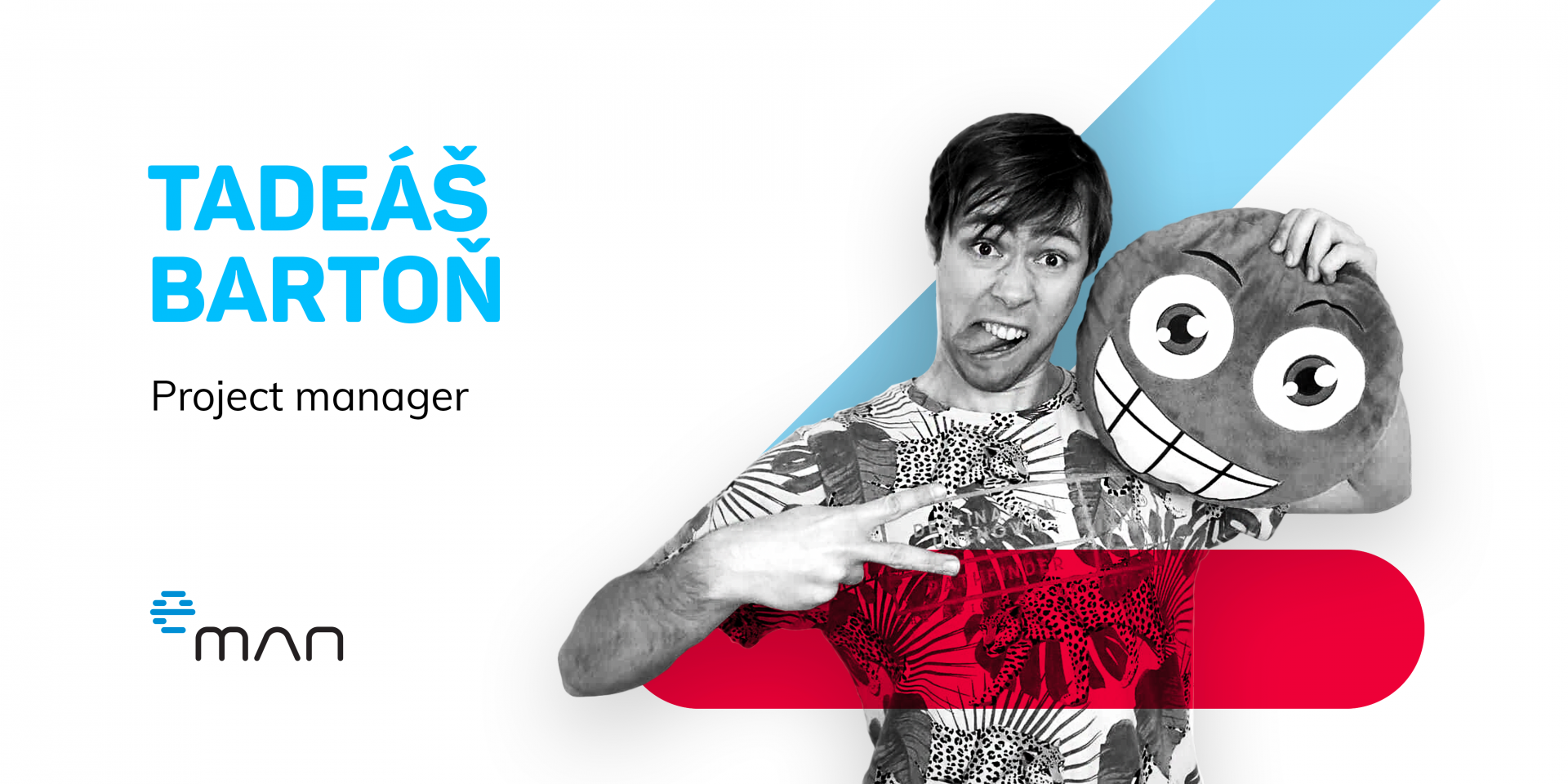 From sports the law of attraction led him through a gaming studio, to corporate, to project management at eMan. Meet Thaddeus.

I’ve been into IT since I was a kid – but I had other hobbies, and so I didn’t really know which way to go. I played 9-pin competitively then. It looks like bowling, but with nine skittles arranged in a diamond, and the ball doesn’t have holes. The training and matches were intense, and during adolescence I started to have major back problems.

And actually, thanks to that, I learned how the human body works and wanted to go to into physiotherapy. However, I did not have the courage to go to a big city, far from my family, so I followed a friend to the IT school in Jindřichův Hradec, where I could commute daily from my home in Dačice.

In sophomore year, we went on a school trip to FEL ČVUT in Prague, where there was a week-long, winter electrical engineering program. The teacher entered me and another classmate for the Electrical Engineering Olympiad, where we landed in the TOP 10 in the Czech Republic. I lectured there for the first time in front of an academic audience – it was exciting and gave me the confidence I needed to play a big role in IT.

So, I spent the remaining 2 years of high school studying computer game development. My graduation project was at UNITY 3D, and I was inspired by a certain Czech gaming studio. Back then, it was like a dream from another universe. If I could ever work there, that would be absolutely fantastic, I thought.

When I got to FIT ČVUT in Prague, I didn’t like a lot of the subjects. I knew I wanted to do IT, but I definitely didn’t want to program super complex systems or applications. And then there was a lecture by an expert on QA lead and gaming applications. As luck would have it (now I know it was no coincidence), it was a man from the gaming studio I’d been dreaming about since high school. One of my classmates knew him, so she introduced us, and right away he offered me an internship as a tester. So for the first time, I saw how the law of attraction works.

After half a year in the studio, I had learned a lot. I was worried about my final exams, and the boss told me that if I needed anything, his door was open; I still remember how I had to fight back the tears. Even now, after those years. It was just wow. I ended up not taking the exams, and I jumped into a fulltime tester position with all ten fingers. My dream of working in the gaming world had come true. The environment was amazing. Gradually, however, I got to see its dark sides – addiction to marketing, to players, to third parties – the difficulty of making one’s mark. I realized that it was time to move beyond the gaming’s virtual world.

I got stuck in corporate for about 2 years. I had a high position but, some people, with their career egos, had a poisonous air about them – as did the whole environment. My dream was to find a project that would include a combination of amazing people and environment, brisk corporate decisions, no control when you go to the loo, mutual motivation and support between colleagues, while growing and just seeing it’s real. At about that time, I started attending lectures on motivation and personal growth, learned to better organize my life, and to work better with the law of attraction. That’s how I came to eMan.

eMan fulfilled all my dreams of the perfect company. As I educated and worked on myself, people around me and colleagues at work started to recognize my leadership traits. I got an offer to become a QA leader, but I didn’t trust myself because I was lacking the technical skills of a tester. I started to look more into project management. And that’s exactly what I like about eMan. Everything depends on what you expect from your work, where you see yourself, and if you prove yourself; they will do their best to accommodate you. And thanks to the trust between me and my boss, I was able to develop into a project manager. And I’m always working on myself.

Throughout my career so far, I have felt huge gratitude, and I like to watch how things fit together in life, based on our thinking, and how all circumstances play a role. I am very inspired by other people, I devour their stories and successes, and I send this energy to the world. One time, I came home and my mother mentioned that her colleague had a son in Brno who was studying IT. He didn’t like school very much and wanted to start working, but he didn’t know where to start. I immediately saw this as an opportunity to pass on this karma and experience.

I called him and we discussed what was going on. I actually became his private HR consultant. We contacted X companies – unfortunately it didn’t work out at eMan, but elsewhere it did. He eventually moved to Prague, and today he is a great test leader. These are moments that always resonate in me. To open the door for others, to help them discover their potential, and at the same time, just to send good karma…