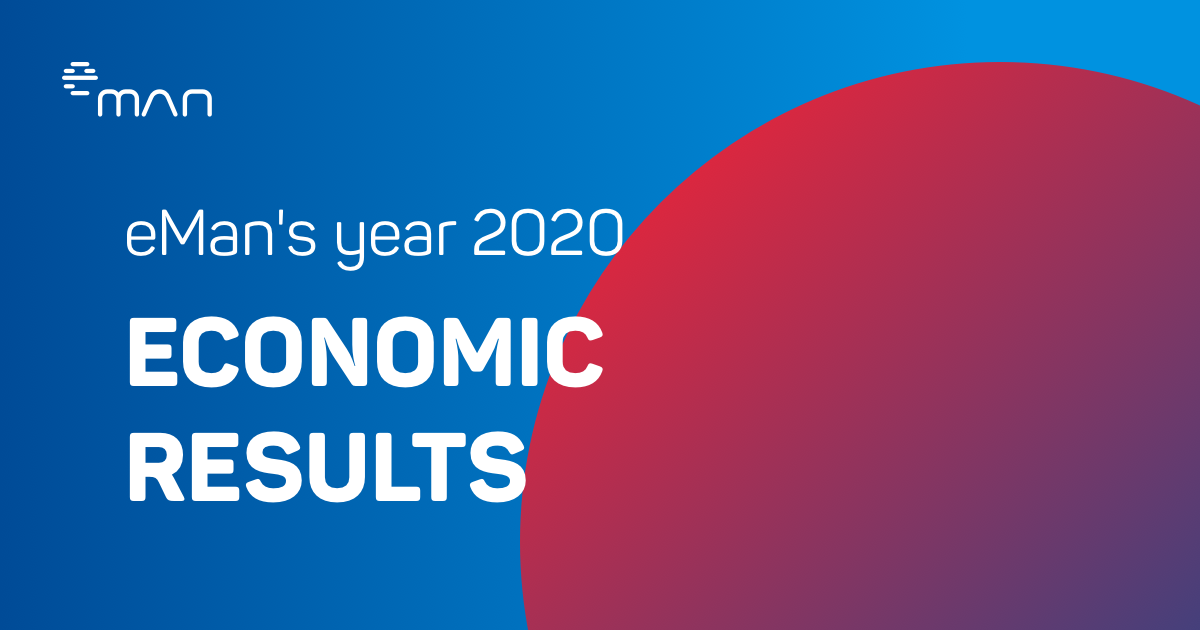 Despite 2020 having been a complicated year, the Czech IT company eMan confirmed that software companies are thriving in a crisis. After its successful entry on the Prague Stock Exchange in August, eMan affirmed its ambitions and reported the best economic results in its history. For the first time, turnover exceeded CZK 170 million.

Prague, Czech Republic, 11 February 2021 – Five million CZK – by that much, eMan exceeded its original turnover projections for 2020. The resulting CZK 175.3 million was the highest number in the company’s history. Several factors played a role, one of the most important of which was that, due to the current coronavirus pandemic, there is a growing interest in the digitization of companies. This trend is not expected to change in 2021.

“The coronavirus has shaken the global economy in a way that few of us could have imagined. However, the IT segment is generally considered to be one of the “winners” in this difficult period. It was in this situation that companies realized the importance of digitization and, thanks to that, interest in our services naturally grew,” commented Jiří Horyna, CEO of eMan.

Success at every indicator

In 2020, the company recorded a turnover of CZK 175.3 million. Gross operating profit, also known as EBITDA, reached CZK 12.5 million. The achieved EBITDA is almost CZK 10 million higher than the original projection presented to investors when eMan entered the stock exchange. After deducting interest, taxes and depreciation, the company reported a net profit of CZK 2.4 million. The company thus exceeded its predictions in every respect.

“Last year’s results may be surprising but, for us, certainly not unexpected. This despite the fact that the coronavirus slowed down almost all business activities for some time. However, large reserves were quickly freed up for digitization in many domestic companies, and I am not afraid to say that the IT market experienced record numbers last year,” added Horyna.

eMan wants to break the CZK 200 million mark this year

eMan isn’t hiding its ambitions for the coming years. Projections this year estimate a turnover that could, for the first time, exceed CZK 200 million and, in 2024, CZK 350 million. EBITDA and net profits are expected to continue to follow this upward trend.

The company has long been an important supplier of software solutions for companies such as Škoda Auto, ČSOB, E.ON, PPL, Bohemia Energy, Honeywell, Lesy ČR and ČEZ. eMan is also doing well abroad – clients, for example, include ConstellR in Germany, and Tenaris and Veralink in the USA.

Entry on the stock exchange brought over CZK 46 million

Last year, eMan entered the Prague Stock Exchange, where it received unprecedented interest. On the START Market, the company was subscribed for 914,000 shares at a total value of CZK 46.6 million, i.e. CZK 51 per share. Great success was also demonstrated by the number of orders, which exceeded the offering by 111 percent. As of 10 February, the share price is CZK 68.

“The interest in our shares was surprising not only from large investment funds, but also from small investors interested in our company. We thank them all for the trust they have placed in us. At the same time, we helped open the doors of the stock exchange to other domestic companies, which began to enter the stock exchange very quickly,” Horyna concluded. eMan‘s audited results will be available during the first half of 2021.