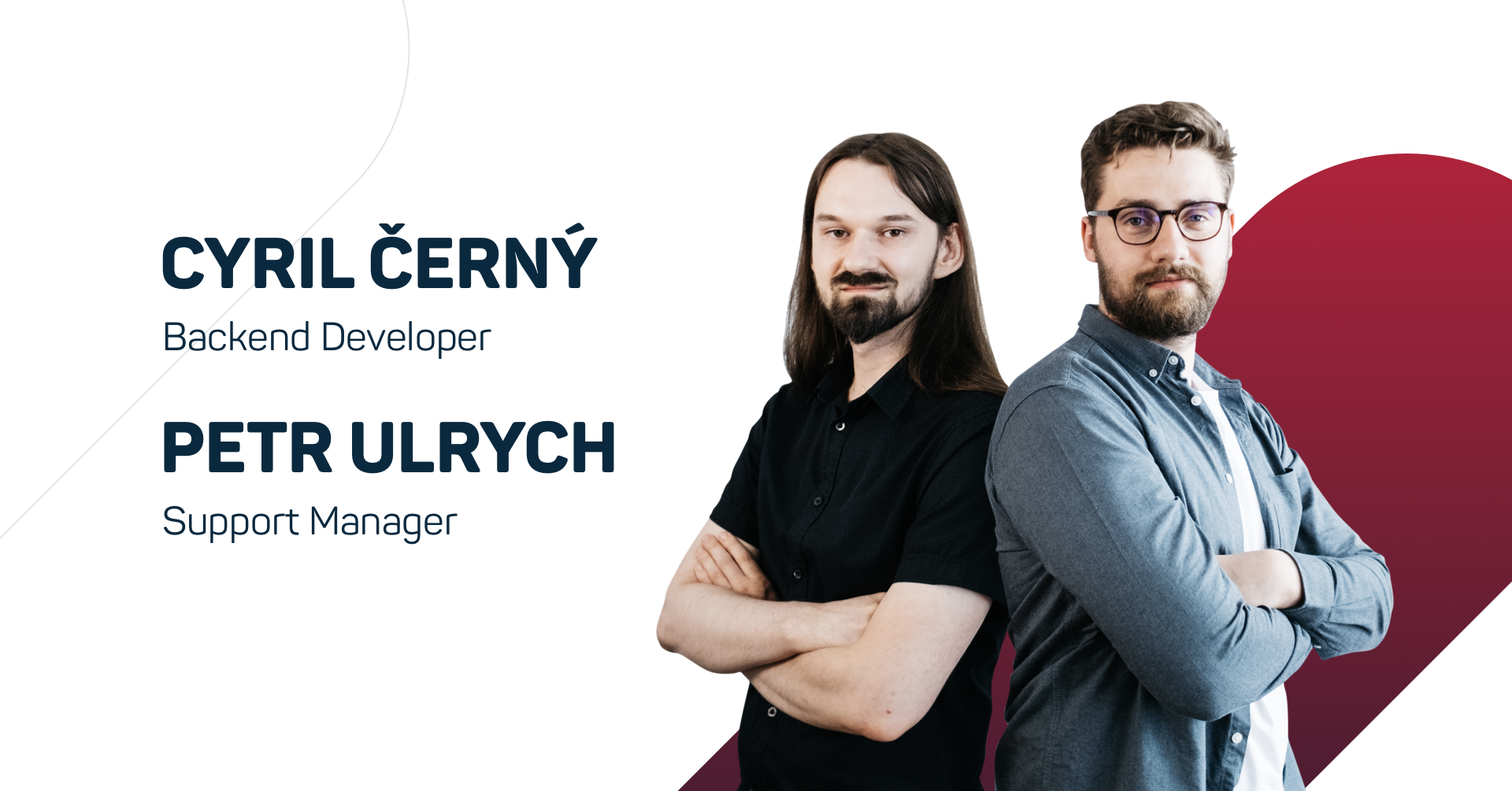 Meet our tandem of colleagues Cyril and Petr – the indispensable backbone of our support department.

If you thought that submitting an app to the App Store or launching a web portal is where the work on software ends, you’d be mistaken. Our stellar support team is ready at the scene, making sure everything runs as it’s supposed to. And, when a problem arises, they resolve it in a flash. Or, at least, they notify the client that the profusion of bugs is on the client’s side.

The number of people at eMan who manage the support of previously developed software is hard to count. But there are at least two who are dedicated to support 100 percent – Cyril Černý and Petr Ulrych.

Petr joined eMan in 2019 to help define how a support department can best be organized. Until his arrival, support was managed by designers, who were also in charge of development. “Originally, I worked outside the IT world – in logistics. It was in corporate where I first got into support and related processes,” says Petr. “But it was when my then-boss at eMan, who went with me into detail and shared his know-how, that I got the chance to set up what support on my projects will look like.” Petr took over support-related activities from project managers, and is still in charge of them to this day. “When you say support at eMan today, you can be sure that Petr had a hand in it,” adds Cyril, Petr’s technological right hand.

Cyril has been here a year longer than Petr. In a few short years, Cyril has moved from his original role as Ruby on Rails Developer to Tech Lead on all of his projects. It quickly became clear that he is handy at many things – besides backend, he is also good at frontend, crossing over into DevOps, and he enjoys doing things that surprise even him. “I never thought I would ever want to talk to a client,” chuckles Cyril. “But in time, I found it easier to just call the customer than to deal with it through an intermediary or by email.” According to Petr, Cyril is also adept at explaining things to the client in layman’s terms, which greatly facilitates the overall communication.

The opportunity to develop yourself in the direction that attracts you the most, or that you are best at, is what Cyril appreciates most at eMan. “No one is too concerned about where you came from or what you did before. If you want to grow, you can,” agrees Petr. “Like how Vašek Loufek went from HR to being a tester, or Hrvoje Vogrinc, who ended up in the role of business analyst.“

Although the software field and our times have led to more working from home, the support team feels best in the office together. “It’s very important for me to see my colleagues. And things work out quickly when people are physically together,” remarks Petr. Cyril agrees: “We have to be reactive; when it comes to support, every hour counts. Before we can agree online about what to do, Petr rather rushes to the office with a request, and that goes much faster.”

But the speed of communication is far from the only thing that suits them about their team. They have found kindred spirits not only among their closest colleagues, but also at eMan in general. “I’ve had previous jobs where everyone was very much on their own; people were soloists,” Petr muses. “They were actually more like co-workers. It’s not like that here.” Cyril concurs: “Here you find people you’d like to have a drink with after work.” It soon became clear to me that these were not just empty words. Not long after our conversation ended, the boys threw on their backpacks and drove off with a group of colleagues for a weekend at the cottage with a full case of beer. Not co-workers – eManers.