Getting up before dawn has its perks | eMan

Getting up before dawn has its perks

This year eMan once again participated in the Bike To Work competition. And we rocked it; we won the title of Prague’s most bike-oriented employer of 2018 and our COO Michal Kosek is this year’s second-best performing cyclist. What did our teams experience during their rides and how did we support them?

1 month, 2 teams, 9 eMan team members, 6.020 kilometres and countless hours spent in the saddle. For us, May was a month dedicated to bikes. And it was worth it, Prague’s most bike-oriented employer of 2018 will fit nicely into our collection of green trophies. But it doesn’t end here, the weather’s nice, let’s ride on!

What did the eMan team experience on bikes in May?

Dominik Matoulek, the author of our localization series, rode his mountain bike on dirt roads, for the route to work to be more interesting.

Martin Matuna mixed business with pleasure as his car was being repaired in May. And he also completed the 53rd Praha – Prčice Walk as a part of the Bike to Work initiative.

Verča Bohuslavová was approached on a bicycle path by a senior citizen on a bike who asked her if she wanted to ride with him to Klecany because he doesn’t enjoy cycling alone. They rode side by side to the crossroads before parting ways.

Jana Lochmanova found out that the later she rides to work, the less athletes and the more people with dogs she encounters. She also had her first experience of the bicycle chain falling off, but fortunately she did not fall off the bike (so she says).

Michal Czinner discovered that all the beer-stands are closed at 8 AM, even though he had just cycled for fifty kilometres and would really have enjoyed having one. He also confessed that he managed to ride ⅔ of his total kilometres in two days. And he borrowed a road bike for the last few days and he’s been thinking about buying one ever since.

Mirka Vodičková rode through Stromovka most of the time and, after one month when she took the metro again, she felt like she was in a different world. She even had enough courage to ride her bike to the city centre, by the National Theatre and Charles Bridge, among all the tourists and trams and cars. It was an interesting and adrenaline-filled experience to feel the rush of the city up close as an impartial observer.

Michal Kosek, our co-owner and COO, reached a respectable 4.303 km and came second in a republic-wide category. But it wasn’t easy. In order to reach this number, he got up every day at around 3 or 4 AM and started cycling.

Michal, how does it feel to cycle 4.303 kilometres in one month?

I started in the morning at the right bank of the Vltava, in the direction of Černošice and I had a route planned, sort of a circuit. There are pheasants beyond the Barrandov bridge and they flew up when I rode by. The sun was rising and it was just magical. I also saw a lot of other animals, like rabbits and hedgehogs.

Mid-month was the most difficult time. There were heavy rains and I cycled 125 km in the morning and 80 km in the evening, during which I got absolutely drenched about four times. And on top of that I fell off my bike on the tram tracks next to Mánes. That’s when I was really down, mentally. But when you ride in the morning through Modřany and you see the sunrise above the golf-course, you recharge your batteries in an instant.

The longest ride was on Friday evening, when I cycled to Nové Mlýny dam, managing 300 km. That was a very pleasant ride. Eastern winds blew the whole month and I started most of my rides against them, which was tough. And sometimes the winds were so strong that I was really relieved to finally turn back at Poděbrady. On the last day, it was a Wednesday, it rained heavily again and I got a flat tire four times. Two in the morning and two in the afternoon, I guess one needs to pay more attention to the road than ladies along the way. 🙂

But the most challenging thing is that it actually took up all of May. All I did was sleep, work and cycle. We had a baby born at the beginning of the month and I didn’t enjoy it as much as I’d have liked. Sometimes when I was out biking at night I thought: “What am I doing? I want to be home with my family…” and I need to thank them for supporting me the whole time.

I ran a marathon at the beginning of the month, then managed around 200 km a day on the bike and the next Saturday after the competition ended I ran a half-marathon. So it was quite a challenge for my legs. But the whole competition is just about your mental state, not about your physical condition. And I just didn’t feel like sacrificing even more during the last week, so I cycled only around 60-80 km every day. I missed my kids and I wanted to spend more time at home.

My hat’s off to Honza Kavalír who beat me and finished with an impressive 5.004,6 km and, most importantly, to all who don’t think about it as a competition… As a simple race to get as many kilometres as possible. To those people who usually drive a car to work and who took this as a challenge and tried their best to use a bike. Or kick scooter, tram or if they simply just ran…

It also gets you into a way better mood than if you have to sit in a traffic jam for ninety minutes before getting to work. And you also do your bit for the environment. I wish that people would start using alternative forms of transport more and more, trams, tube, bikes. I think that that’s a vision that the city should adopt and work on. To actually support all these initiatives instead of building more roads all over the city. I hope that people will stop being happy in their comfort zone and try something different. Personally I don’t remember when the last time I drove my car to work was.

It would also be good if people were more considerate to each other. Over the month, I discovered that car drivers are not considerate towards cyclists, but it also applies vice versa. And I’d like for people to be more tolerant to each other, it doesn’t matter if they’re sitting in a car or on a bike. Just for everyone to be able to ride safely.

How did we support our cycling heroes?

We also provide a secure room for bikes if you ride your own to work.

Afterwards, you can freshen up before work in one of our showers.

We dressed our heroes up in fancy and functional eMan cycling jerseys. Because “Where we’re going we don’t need roads”. (Dr. Emmet Brown, Back to the Future)

And we evaluated the whole event together over lunch, where we got, you guessed it, on our bikes. 🙂 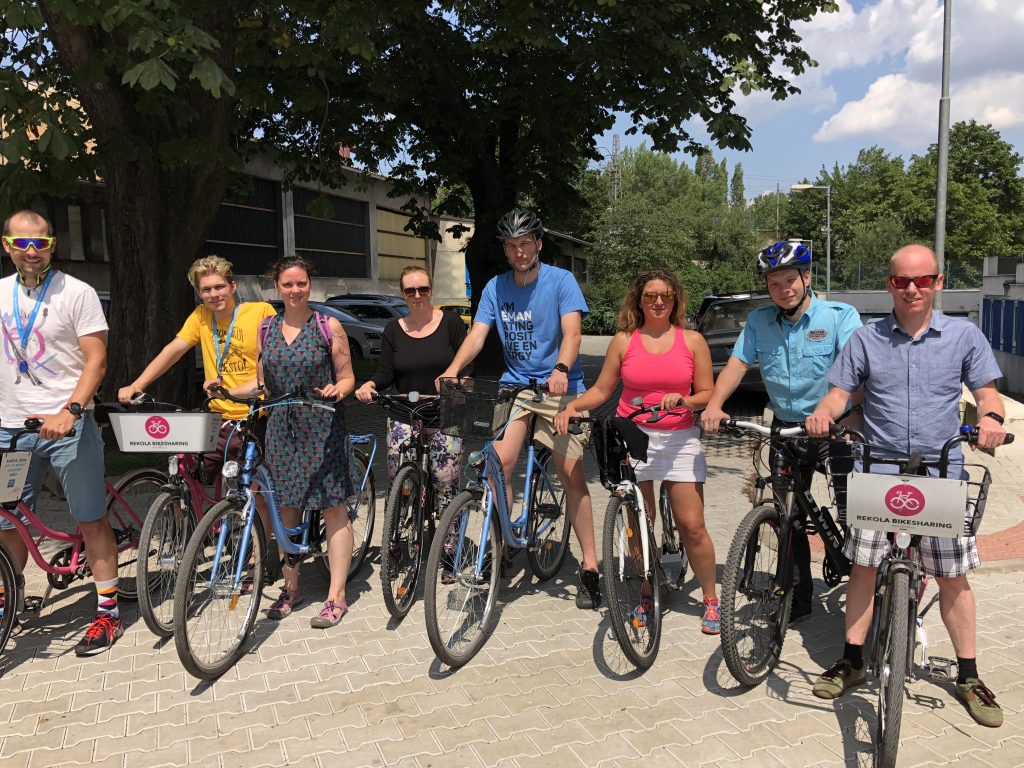 Full results of the Drive Your Bike To Work 2018 competition