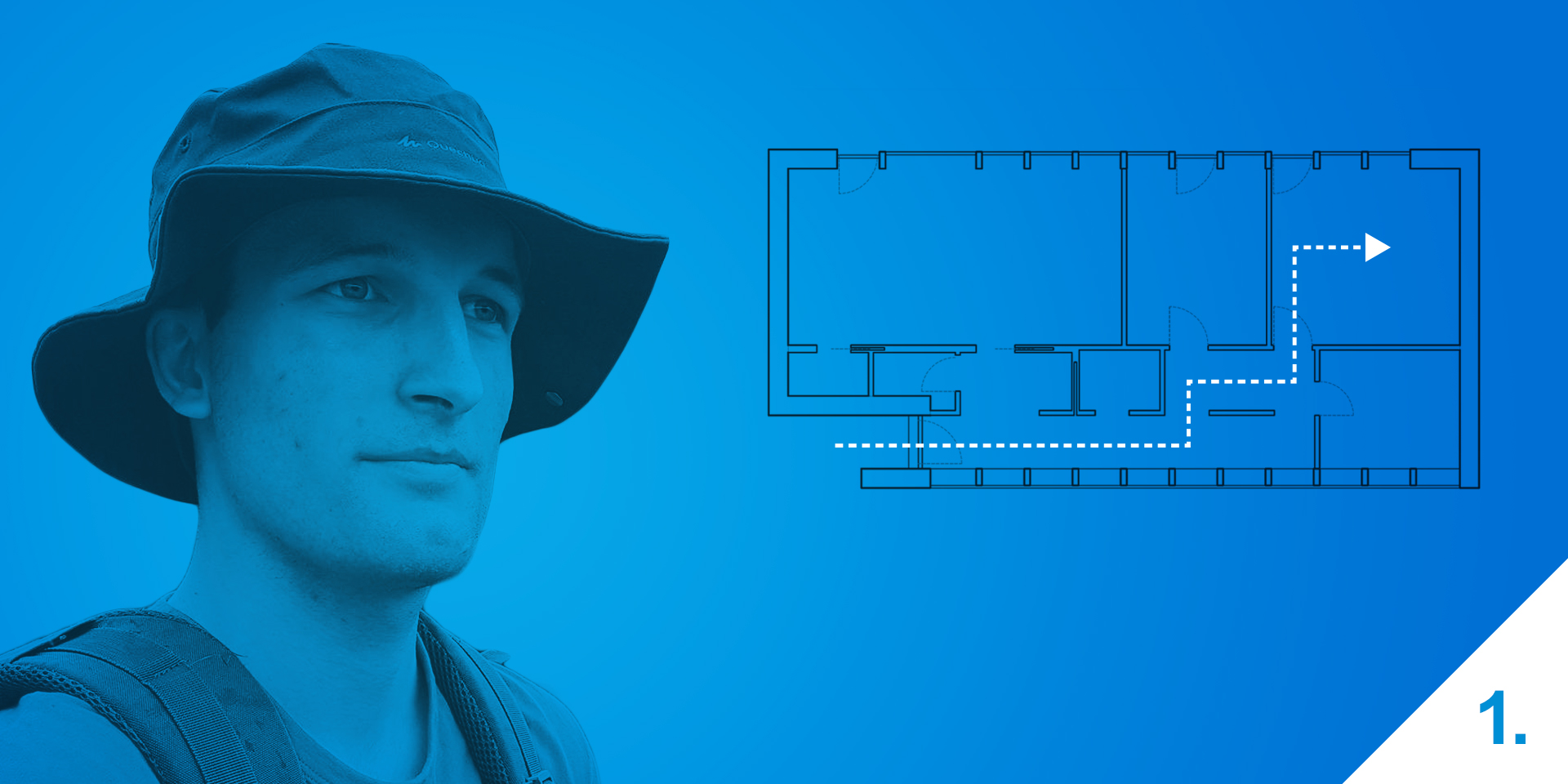 Satellite based GPS is a widely used and very common thing these days. But how does one use navigation where GPS is not available? How can a user localize objects or people in buildings? This series will present the ways to set up a simple localization system in buildings with a to-the-room accuracy.

The navigation in a car is only part of this puzzle. This article considers navigation as a set of procedures allowing you to determine the position or location on Earth or, generally, anywhere in space. There are a lot of navigation methods, i.e. ways to determine a location.

Why bother with localization without satellites?

There were times when one could navigate using landmarks, such as a hill, a pond, or a castle. That was sufficient on land and guided you from one city to another. On the open sea, the sailor could use the stars for navigation or, during the day, the closest star of all, the sun.

When we started conquering the universe, a new opportunity presented itself – sending satellites to space that would be able to determine our location on Earth with an accuracy of a few meters. That’s why nowadays we can find GPS everywhere.

But this navigation is only usable outdoors, when you can see the sun or a prominent landmark. These methods are not usable inside a building. Well, actually they are, but not in an intuitive form. Buildings are quite large and can get treacherous. All the hallways and rooms whose layout and locations are the same on all floors can confuse anybody and one gets lost easily.

Why determine your location in a building?

The answer is simple: An Orwellian world full of spying over the internet will cheer for a new opportunity to track our movement in detail even in buildings. It’s a bit of a dystopic view, but quite close to the truth. Because this “spying” has a lot of practical use cases. If a smart home knows where its members are, it can better optimize its performance. For example, it switches off the lights in unoccupied rooms.

Stores can use location services to adjust their advertisement. This can already be done using iBeacon, but it only functions as a beacon sending out a web link which has nothing to do with determining a position. If a phone gets into its range, the link is displayed and voila, an offer coming from the closest shop is on your phone together with a sale or discount. The real localization could be used by shopping malls for giving directions to a certain shop.

And the usage does not have to be limited to mobile phones; various robots could use this service too. A security robot walking through a building could then clearly determine the location of a possible intruder. It would know where the intruder is because it would know its own location.

Is this solution already in practice?

The possible usages of location services in buildings are quite extensive but, for now, limited to only a couple of showcase usages. Google, for example, limits its Indoor Maps to huge airports, stadiums, shopping malls, and museums around the USA. And as I already mentioned, iBeacon and its “localization” is more marketing related then real.

Why is the localization in buildings not commonly used?

There are already solutions in place so the technology is available. What’s the issue then? It’s not that simple. A lot of obstacles need to be solved or deftly circumvented.

The first obstacle is the choice of the technology used. What is the one thing that you cannot picture today’s world without? The internet. This omnipresent network also uses wireless access points for its operation. It’s not necessary to connect the end devices, such as a phone or a laptop, to the network via a cable. All you need to do is connect to a certain network, e.g. Wi-Fi.

Where am I going with this? These transmitters are commonly distributed in the building in a way that allows for the signal to cover the whole building. What if we use these existing access points for localization? What consequences would it have? Would it be sufficient? Would it be accurate? How would it work? And would it actually work?

What will you learn and how can you use this knowledge?

In this series I will try to show you that you only need a Wi-Fi network that covers the whole building to set up a simple localization system with a to-the-room accuracy. The algorithm will tell you the exact room you are in and also your exact location in the given room.

Used algorithms and methods can be applied also to other wireless networks. Bluetooth, ZigBee or GSM, there’s no limit to your imagination and every network is better suited for something than the next. This series will focus mainly on Wi-Fi and Bluetooth Low Energy. The reason is that both are present in almost every smartphone nowadays.

I will show you three basic methods on how to approach the localization; dead reckoning, multilateration, and the fingerprint method.

I will cover these in detail and we will also deal with some math. Don’t worry, it won’t be a Uni-level math but knowledge of analytic geometry will still come in handy.

And there will also be a small surprise at the end. These localization principles are not intended solely for indoor usage in, e.g. buildings. They can even be used outdoors, on Earth, on Mars, anywhere. All you need is a few transmitters and if you can receive the signal, you will be able to do some cool stuff after you finish this series.